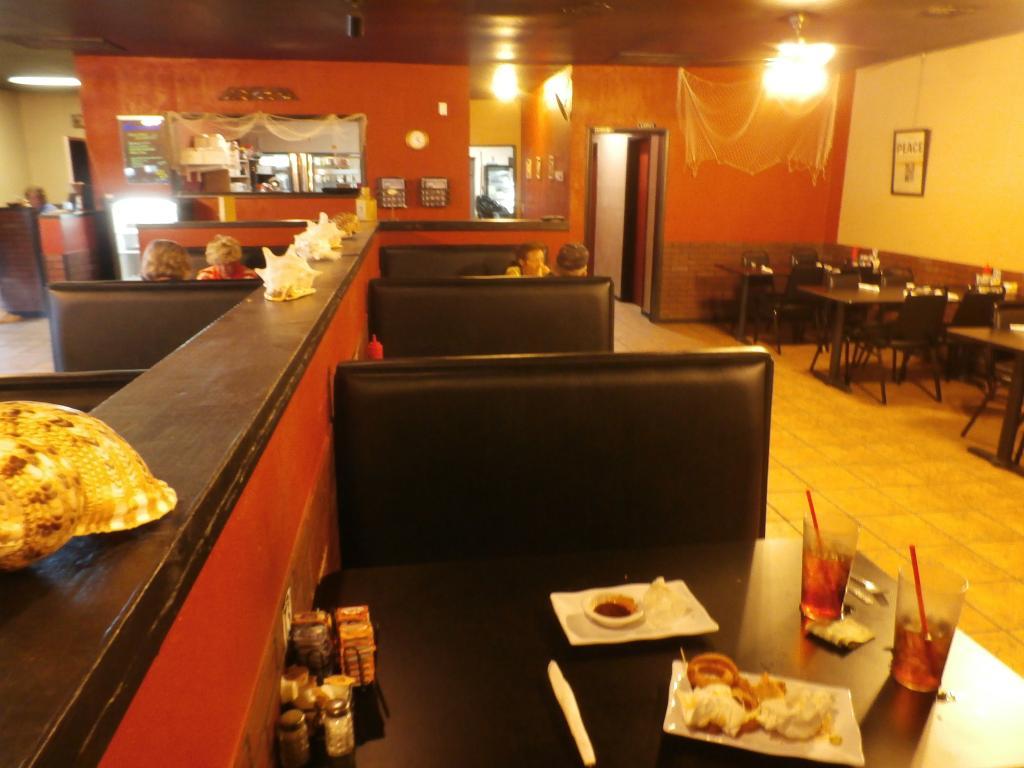 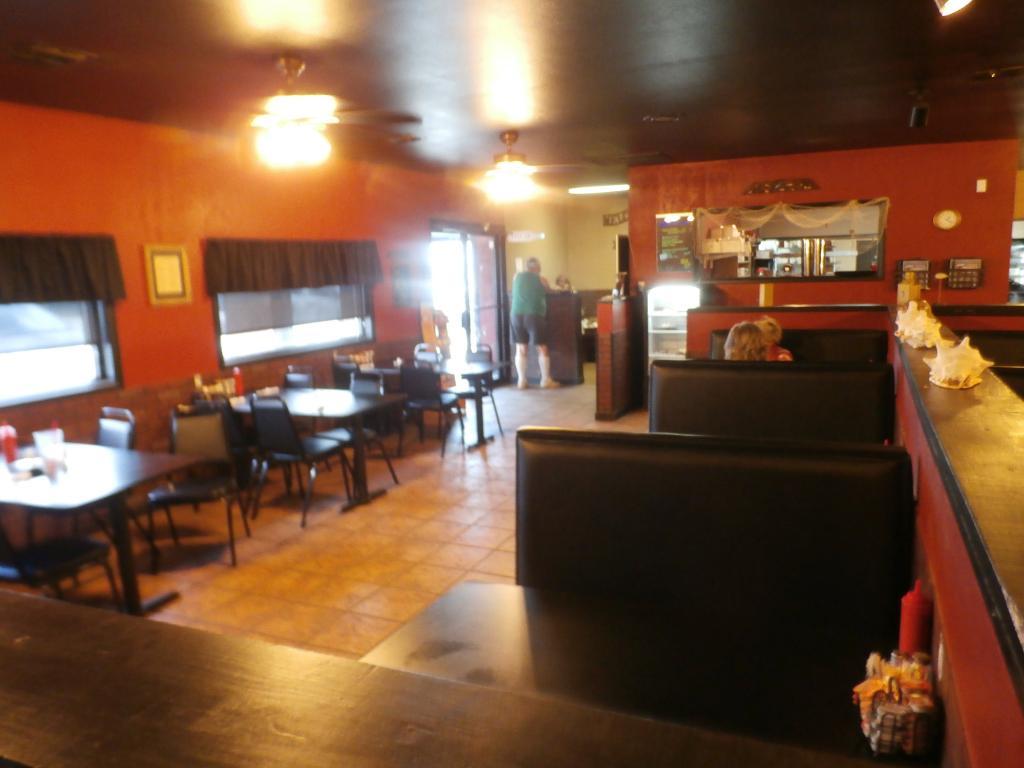 Is it dine in or just take out?

How do you make your red wine balsamic dressing? Best I have ever tasted!!

You will most likely need to contact the owner's for this question.

I don't think so

Nice place but they seemed slack in the attention of all customers, especially when needing refills

This place would get five stars, but we had to clean off our own table to have a place to sit. This doesn't reflect on the caliber of the help or the food, but rather management. Clearly not enough service staff. One waitress on duty, one person to keep tables cleaned off, and those two took turns cashing people out. Food is good. No question. Excellent menu options, large portions, tasty, reasonable prices. What help was there were kind, friendly, personable, but obviously overworked. No one should have to wait in line to pay the tab.

Food wasn't very good. Mashed potatoes looked and tasted like glue and you could see where we CUT them w our forks!!! The coconut cream pie had taken on the taste of the fridge!! The salad was good tho Lol as was the service!!

I love their catfish and their chicken fried steak. You leave feeling like you really got your money's worth.

We stopped by here for breakfast on the way back home after staying at some little cabins in Crowder. These huge plates of food came out with a huge slice of ham. Each plate was awesome and way more than us ladies could eat but my husband devoured his pork chops and eggs plate. Everything was cooked perfect with the best service around. We’re definitely going to eat here again when we come back through. Thanks so much!!

My wife and i have been coming to the angler for years..... great food, awesome service and delicious food. I definitely recommend the angler any time you're in the area.

Great place to grab a bite to eat. Large portions and fair prices. The staff is very pleasant as well.

Ordered all you can eat ribs and second serving was partially frozen. Had the waitress feel it and all she said was sorry. No refund or anything. Last time I'll eat here.

Food and service AWESOME. I had the best BLT sandwich EVER. They aren't stingy with their food, great portions. Thanks Jason !

The food was, as usual, very good. However, in this time of gradual reopening their precautions are virtually non existent. No social distancing of seating. No masks on servers. Tables were not cleaned before we sat down. When they were cleaned it was not done very well.

Loved the food! The cook even came out to see what we thought! First trip we will definitely be back!

The waitress got our food wrong 3 times. By the time we got back home my husband was sweating and throwing up. He had food poisoning for 2 days. I called to complain and the owner told me to check my husband for morning sickness and hung up. Will never go back and I also reported this to bbb

This place is great. Service is good, the people are warm and friendly. You get an insane amount of food; all of which is excellent. Best fried catfish I have ever had. Definitely worth the stop!

The food is amazing, and the staff are very welcoming love this place

Large portions, good, fresh cooked mains. Very good value for the price. I walked out with more food than I ate. Our drinks were never left empty and the food came out hot in a reasonable time. We had soup and it was out a minute after we ordered. Good, strong iced tea too. I ordered a pork chop dinner. I got two whole bone in loin chops, they could have used a bit more salt, but the shaker was there and it was fine. For sides I got potato soup, which was very strongly flavored with bacon and onions and salty, but the flavor was good. It was just a bit thick. Mashed potatoes, which were homemade, and gravy, which was packaged, but good quality, and green beans, which had a bit too much smoke flavor. My stepfather had the chicken fried steak, which was hand breaded and the breading was well seasoned. It was also about 12 inches across. He had waffle fries, which were cooked from frozen and corn, which was also cooked from frozen but had a decent amount of butter in it for flavor.

Good Catfish and the prices were very reasonable

For a small spot off the side of a highway, you won't be disappointed. Better than fast food! I had the all you can eat ribs for $14. Not smoked but super tender and good flavor. Bbq sauce was good too.

I have to give it a 1 star for slow service, we had no waitress to take our drink order for over 6 minutes, and she was the only one that I even seen and had 7-10 tables, almost all were waiting for food. We just ended up leaving, too long to get drinks let alone food!!! Sorry 1st time visit and not impressed with the staff for lunch.

This place was clean. They have huge plates. I got a blooming onion and a club sandwich. I got 2 large plates. They were full. I've never seen a club. Sandwich so big. I was barely able to eat half of the club. Was good food and friendly service.

The food was just wondering. Service was good, we didn't know they served breakfast. We will be back !

Food is very good The Waitress are friendly

Really good catfish! Our waitress was exceptional. She was so sweet.

The service has went down hill. Having to wait almost an hour for your food is crazy..

People have gotten sick eating their food. Food being prepared on same surface with raw chicken!! I know. I personally watched the OWNER do so!!

Service was very poor. The food was cold. And the person collecting the money was told about it and had a don't care attitude.

This is not your typical under executed small town diner. Highly recommend it as one of Eufala's best diners. You'll find a proper menu from a scratch kitchen featuring USDA choice beef, fresh catch of the day, breakfast served all day, lightly battered fresh catfish, and pure comfort food.

ALWAYS terrific food. ALWAYS excellent service. The main cook is thee best. Just found out he doesn't own the place...he's just that interested in the customers. Super nice guy. We have a special waitress who takes very good care of us every single time. Wish we could be in more often.

Good food, good price. Only complaint would be if they r busy they need to add waitstaff so the waitress can attend her tables a little better. Overall worth the stop

Me and my girlfriend went yesterday and, as you would expect, they were packed on a Sunday morning. We got there a little late, around 10:20 am and gave our drink order almost immediately. We ordered our breakfast around 10:30 and it took a while to get the food. We were served about 40 minutes later but the food was good. I had an omelette, hash browns and what was supposed to be biscuits and gravy wound up being biscuit and gravy (just 1 biscuit). But there was plenty of food. We'll be back, it had a great diner/cafe feel to it. There were some really friendly folks in there and the staff was super friendly. 4 stars would've been given if I would've gotten my food before lunch time!!

Very good food and service, one of the best at the lake.

Great classic cafe food everything was great food and service 👍

Saw reviews that we could find friendly service, big portions and good pricing. Yes, all the above. Nothing fancy but obviously a locals favorite.

We decided to try this restaurant because it had great reviews from a year ago. We sat down at 10am and our food finally came out at 11:28am. During the hour and a half wait our waitress never checked on us and we watched at least three quarters of the people seated leave without receiving food. The food itself was ok but most definitely not worth the wait. Between the lengthy wait and terrible service I’d choose a different restaurant.

Great place. Good food and reasonable prices. And prime rib is the best.

Excellent selection of food! We've eaten here MANY TIMES, the food is always excellent and service is always great too!

Fantastic food. Really unbelievable for the price. Hands down best burgers in town. If you have the chance you need to eat here. The breakfast is amazing as well!

Your question has been sent.

Your review has been submitted.

Want to order over the phone?

Thank you for being with us!

We will call you back!